Every local business that continues to employ their furloughed workers and keeps them on their books until January 2021 will get £1,000 for each employee. Previously more than £27.4bn has been claimed through the Job Retention Scheme supporting 1.1 million employers and 9.4 million furloughed jobs.  It is now estimated that Rishi Sunak’s new Job Retention Bonus scheme will cost the taxpayer a further massive £9 billion.

However, some businesses are now announcing that they will not be accepting this £1,000 job retention scheme handout – even though they are eligible.  Primark, for example, could have benefitted by an estimated £30million in bonuses from the government for bringing back furloughed staff,

A spokesperson for Primark said: ‘I can confirm that Primark does not intend to take advantage of support under the Job Retention Bonus announced by the Chancellor this week.  The company removed its employees from government employment support schemes in the UK and Europe in line with the reopening of the majority of its stores.  The company believes it should not be necessary therefore to apply for payment under the Bonus scheme on current circumstances.’

It is also reported in today’s Sunday Times that William Hill is also set to reject the bonus payments.

In an interview this morning on Sky News’ Sophy Ridge on Sunday, Frances O’Grady, head of the TUC, praised Primark and suggested other employers who could afford it should consider its example.

The Institute for Fiscal Studies say the majority of the bonus scheme was likely to go to businesses who did not need it.  The IFS think-tank director Paul Johnson said, ‘A lot, probably a majority, of the Job Retention Bonus money will go in respect of jobs that would have been, indeed already have been, returned from furlough anyway. This money will go even in respect of jobs which were briefly furloughed, are already back at work and can expect to be still back at work in January, the employer still gets £1,000.

Mr Johnson also said that we could face decades of tax rises to repair finances, adding that managing the debt would be a task ‘for not just the current Chancellor, but also many of his successors as spending pledges would see government debt grow larger than the size of the UK economy, and the political challenge in increasing tax by the required amount would be ‘immense’.

Meanwhile, HM Revenue and Customs have announced that the first arrests in connection with alleged furlough fraud have been made. A 57-year-old West Midlands man has been arrested as part of an HMRC investigation into a suspected £495,000 Coronavirus Job Retention Scheme fraud. Eight other men have also been

The arrest took place after a search of premises in the Solihull area which led to the seizure of computers and various other digital devices. Funds in a bank account relating to the man’s business have been frozen. A suspected multi-million pound tax fraud and alleged money laundering offences were being investigated alongside the furlough fraud.  HM Revenue and Customs say they are currently investigating a high number of such alleged frauds.

On a lighter note, Chancellor Rishi is being called ‘Rishi, Rishi, Rishi….’ A parody on ‘Dan, Dan, Dan……’ following alleged similarities to the legendary Dan in ‘I’m Alan Partridge’. 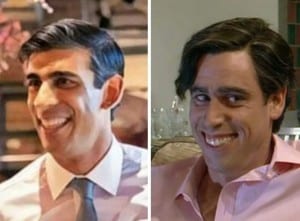 Hungry as a Horse? Get afternoon tea to take away 🐎

How Will This Deep Recession and ‘Hard Times’ Hit Lytham St. Anne’s?