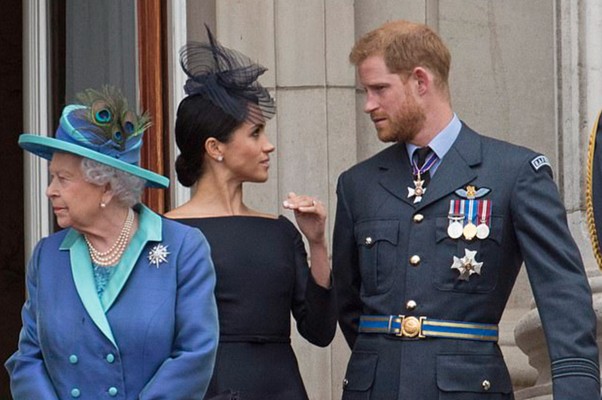 Millions around the world are expected to tune in to their TVs as escalating tensions between Meghan and Harry and Buckingham Palace reach a head.  And the Sussexes interview is shaping up to be big business as CBS is paying Oprah Winfrey’s Harpo Productions  $9 million to air her bombshell interview with Meghan Markle and Prince Harry in which they are expected to spill all about their dramatic exit from the Royal family. The interview will be broadcast in more than 70 countries – including Australia, Canada, Germany, Italy, about 40 nations in sub-Saharan Africa and even Iceland – in deals worth an anticipated hundreds of millions of dollars.

Global anticipation is building as trailers show Meghan accusing the Royal Family of ‘perpetuating falsehoods’ about the couple as she referred to the palace as ‘The Firm’ and blamed her husband’s family for pushing them to speak out. Oprah asked Meghan, ‘Were you silent or were you silenced?’ adding, ‘I just want to make it clear to everybody that there is no subject that is off limits’.

Harry shares his concerns about their mental health and says: ‘I’m just really relieved and happy to be sitting here talking to you with my wife by my side, because I can’t begin to imagine what it must have been like for my mother Princess Diana going through this process by herself all those years ago, because it’s been unbelievably tough for the two of us. But at least we have each other.’

The Queen has not been given an advance copy of Meghan and Harry’s tell-all interview. The Daily Mirror has reported that Senior Royals and Palace aides will watch the much-anticipated interview ‘at the same time’ as the rest of the world, with network CBS set to air the two-hour special in the US at 1.00 a.m. UK time on Monday morning. Officials have vowed to ‘reserve judgement’ on the show and will decide on Monday whether to make a public response in light of anything specific Meghan and Harry have to say. ITV will broadcast it at 9pm that evening.

Meanwhile, in an extraordinary statement, Buckingham Palace announced a formal probe into bullying allegations reported in The Times surrounding Meghan and Harry. Royal aides have been reported as feeling humiliated, ‘sick’, ‘terrified’, left ‘shaking’ with fear, and being reduced to tears by Meghan. In response the Palace said: ‘We are clearly very concerned about allegations in The Times following claims made by former staff of the Duke and Duchess of Sussex.  Accordingly our Human Resource team will look into the circumstances outlined in the article. Members of staff involved at the time, including those who have left the Royal Household, will be invited to participate to see if lessons can be learned. The household has had a dignity at work policy in place for a number of years and does not and will not tolerate bullying or harassment in the workplace.’

A spokesman for Meghan and Harry claimed The Times was being ‘used by Buckingham Palace to peddle a wholly false narrative’ before the interview.

ITV have paid a reported one million pounds for the two hour show will be shown on Monday 8th March at 9.00 p.m.