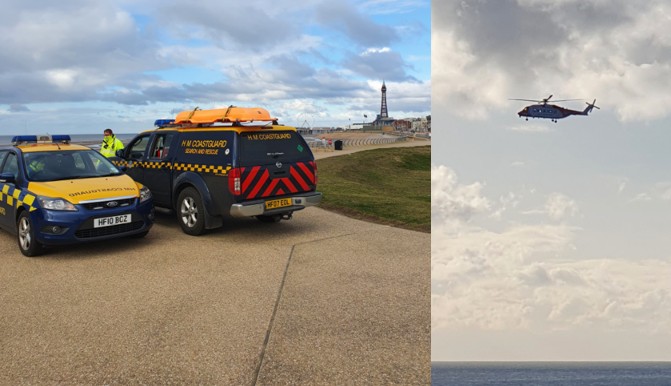 A hoax caller radioing for help from what he claimed was a burning ship caused a major incident involving, among others, Lytham’s HM Coastguard volunteers, a rescue helicopter and the RNLI.  The cost of the hoax call meant putting danger in the way of over thirty volunteers in freezing conditions, the wasting of many hours of time, and the unwanted and unnecessary use of thousands of pounds of valuable resources.

A  ‘Mayday’ call was picked up by HM Coastguard in Holyhead, North Wales yesterday afternoon (Monday 8th February) from a man claiming to be on-board a 15-metre vessel (49ft) which was on fire nearby the end of a pier in Blackpool. The caller claimed to be one of three men onboard the vessel – and he claimed they needed an immediate rescue. At 1.14 p.m. the volunteers from both Lytham’s and Fleetwoods’s HM Coastguard were mobilised.

The volunteers meticulously searched the ice-cold waters for the burning  vessel from Gynn Square to Squires Gate.  But the search was in vain – no such vessel was found. Nevertheless, throughout the search, the caller continued to call for help. The HM Coastguard therefore requested the services of RNLI Blackpool who launched a lifeboat from its Central Pier station. Because of the severity of the situation, a helicopter from the operations centre in Holyhead also joined in the search for the burning vessel.

After three hours scouring the sea, information was gathered that the Mayday signal was coming from inland – and not from the sea.

All teams were stood down and the rescue operation was brought to a close.

Paul Little, station manager at HM Coastguard in Lytham, told the Lancashire Evening Post that the hoax call had cost thousands of pounds in wasted resources and put the lives of rescuers at risk.

But he said such transmissions had to be treated as real because rescue teams cannot take the risk that somewhere is in genuine need of help.

Paul said, ‘If we think someone’s in danger or in trouble, we will always search for them rather than risk loss of life. It is incredibly frustrating because this man was on the radio for a long time and continued to pretend that he was in danger, even as we stepped up our rescue operations to help him. Because of this, we had to deploy a number of rescue teams and wasted resources that might have been needed in a real emergency elsewhere. Having the helicopter come out to help our search costs thousands of pounds every hour. Unfortunately, we do get these hoax calls every now and then, but it is not very often we have one from someone who keeps the charade up for so long.  But we can’t just call the search off because we’re struggling to find a ship. Instead, our response is to step up our efforts and commit more resources to find those in need of our help.’

Paul continued, ‘The mind boggles why anyone would want to do something like this. If there had been another real incident at the time, our rescue teams would have been stretched because of this man and his silly games.  If anyone has any information about who this man might be, we ask that you report it to police as this man is liable to be fined for his irresponsible actions.’