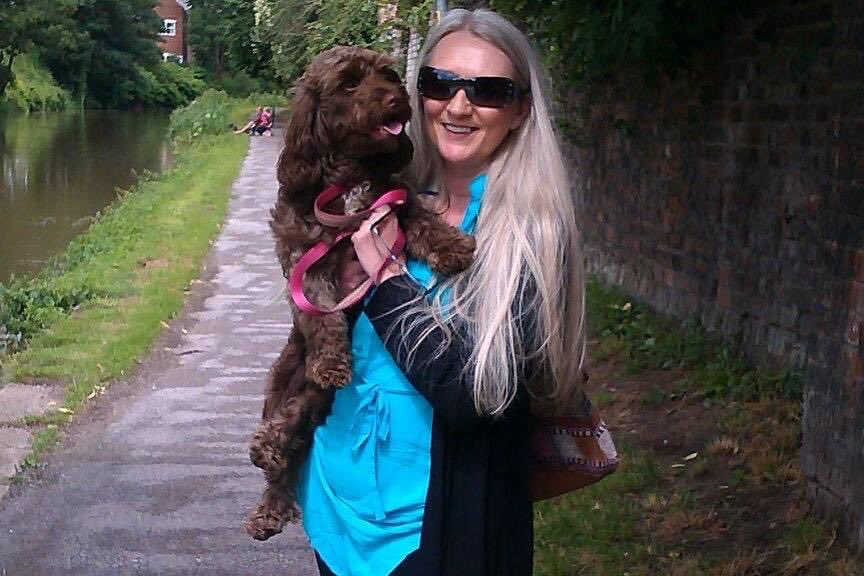 I have always had an interest in animals, from a very young age. My great grandfather and my grandfather on my mothers side, home bred wire haired fox terriers, so there were always animals about. As a child, I had a variety of pets, sometimes taking in injured birds to rehabilitate and release when they recovered. I have always had a dog, and later got adopted by a cat, and they became part of my life too. I had a ‘pet free’ period due to travelling a lot, mainly staying in Africa, and seeing the wildlife there was one of the most amazing experiences of my life.

It surprises some people to know that running Homeward Bound is not my full time occupation. In fact, I run a children’s nursery locally, and have run a nursery for the last 27 years in the Lytham St Annes area.

Following my time without pets, I became the proud owner of a Cockapoo. I obviously researched this crossbreed beforehand, and became very interested (again) in all aspects of dogs, in particular, Cockapoo’s, so much so, I set up a Cockapoo Club. I have published articles about the crossbreed and have written a book on puppy socialisation.

I then started scanning found pets in Blackpool, Fylde, Wyre and some areas of Preston as no one else was doing this in these areas. When I started, I was amazed at the need for this service and formed Homeward Bound, named after the film, where against all odds, the pets found their way home.

During the years of volunteering to help companion animals and their owners locally I have had further published articles on searching and tracking loose and bolted dogs and became a qualified microchip implanter and canine first aider. My interest to learn more about animal welfare prompted me to go back to university and do a foundation degree in animal welfare and behaviour. I then went on to do a BSc (Hons) in animal welfare and behaviour, which I have now completed. My main areas of research have been around stray dog welfare and the impact of voluntary organisations and of breed related health. Next year I hope to commence a PhD in the welfare of stray dogs and the unique reversion of the species from one of our most domesticated animals to it’s wild instincts when lost/loose/bolted over a period of time. This is an incredibly under researched area, and I hope that my research will lead to national changes in stray dog welfare.

Throughout our work in Homeward Bound we have developed a close liaison with a multitude of agencies including vets, councils and other charities such as rescues and the RSPCA and often work in unison for the benefit of the animals.

The work is varied and no two jobs are the same. Although we a primarily a reunification charity, helping lost and found pets and their owners, we do a lot more, such as attending sick and injured animals, including pets and wildlife.

People may think that the low points of the work with Homeward Bound are attending deceased animals, but it’s not. To be able to go out to a deceased animal quickly, and with the aid of a microchip, be able to return that pet to his/her owner whilst they are still warm and soft in one of our beautiful blankets (made by a local lady) means so much to owners for whom that animal may be their only companion or a huge part of their family… Closure with dignity and care is so important.

Nobody wants to be criticised for spending their spare time devoted to animals and for their commitment, but sadly in the animal world, people can often be jealous and critical and this is probably the ‘low point’ of doing this work. Nothing in animal welfare is black or white and often people don’t see the ‘grey areas’. Working with people who have let things ‘slip’ with their pet is often the best way to address the problem, for both owner and pet and sometimes people don’t see this wider picture. An essential part of our work is to work with pet owners and to offer advice when things are difficult for them. This might involve rehoming of pets, or providing support over a difficult period for them. It is essential this advice is founded on current research and is an educated response without judgement and with animal welfare as the priority.

Last year we recorded attendance on pets and other animals which almost doubled our previous years figures and our social media group has grown to almost 15,000 members. This year we have begun a ‘Trap, Neuter, Return (TNR)’ programme for un-owned cats, both stray and feral. These mainly involve cats who have been living feral or straying for sometime, and mainly un-neutered males, which often come to us with injuries due to fighting with other males. We catch, treat, neuter, microchip, test for FIV and FELV, foster and either find a safe ‘outdoor’ home for ferals, such as a farm or stable cat, or a pet home for those suitable. This work drains most of our resources in terms of funds and most of our funds is spent on vet treatments. Every penny raised is spent on the animals. Volunteers provide their time, fuel, etc out of their own pockets. We are fortunate to have a fantastic dedicated team of around 15 volunteers, but the workload is still immense, and continues to increase.