The Prime Minister has today announced that National Insurance will increase by 1.25%. This means somebody on £20,000 a year would pay an extra £130, while someone on £50,000 would pay £505 more – as the chart below, presented on the BBC, shows. However, National Insurance is also paid by employers, who currently start paying the tax of 13.8% on wages above about £9,000 a year.

In 2023 National Insurance will go back down to normal levels, but a new Health And Social Care Levy will be introduced at the same rate. This will appear as such on people’s pay slips. The levy will be paid by all working adults including those over state pension age.

From October 2023 no-one should have to pay more than £86,000 for care over their lifetimes. But, crucially for those who are either in care or nursing homes, people will still need to contribute to ‘room and board’ costs when living in a residential home. Anyone who has less than £20,000 in assets will not be required to contribute to costs. It is also very important to note that this new lifetime limit of £86,000 on care costs applies only for those starting in care from 2023. This means those already in care would have no cap on costs and face using up all but £23,250 – the current limit at which state support ends – of their savings.

The plan is expected to raise £36 billion over the next three years, however the majority of the cash is going to fund the NHS to help reduce the treatment backlog – only £5.3 billion a year will go to social care.

Labour leader Sir Keir Starmer attacked the Prime Minister’s plan, not just for the way it will be funded, but for lacking detail on how it will improve the system. He said Mr Johnson’s plan would hit ‘young people, supermarket workers and nurses’ hardest. The increase in NI means a ‘landlord renting out dozens of properties won’t pay a penny more but the tenants working in full-time jobs would.’

Also the state pension ‘triple lock’ will be suspended for a year, with pensioners given a 2.5% rise, rather than the 8% rise they would have received. 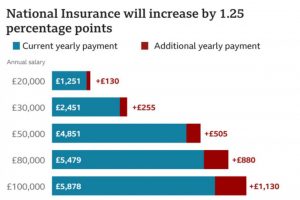 Poor Walter, 3 years after being rescued, his owner writes that he’s the victim of a brutal dog attack in Witch Wood earlier today.

The mystery knitter gets serious about litterbugs ♻️