Could Blackpool follow in the steps of Austria, which like much of the world is grappling with how to convince reluctant citizens to get vaccinated?  With a carrot and stick approach similar to Austria, Blackpool may see its many male visitors and reluctant residents queuing to be jabbed in its notorious ‘red light’ areas!

The carrot incentive is being trialled in Austria and involves brothels in Vienna. They are now offering to inject both excitement and the Covid injection into their clientele by gifting free access to anyone willing to get the jab on-site.  One such brothel, FunPalst, is already giving vouchers of 40 Euros, the cost of entry, to anyone willing to get vaccinated at its in-house pop-up clinic.

A spokesperson for FunPalst said, ‘We have a perfect vaccination line. We have two doctors, we have nurses…We have a room where you are vaccinated and afterwards, we have a room where you can sit down or lie down, so it’s not a joke. It’s a perfect line for vaccination.’ Other brothels throughout Austria, where prostitution is legal and regulated, are now advertising similar deals. This comes as Austria’s vaccine uptake numbers are among the worst in western Europe. Only 64% of the country’s population has had both vaccines.

The stick to beat the unvaccinated is the introduction a new Austrian vaccine passport system that will block anyone without proof of full vaccination from entering a host of venues, including restaurants, cafes, hairdressers, cinemas — and brothels. The stick also involves the Austrian government imposing a lockdown for the unvaccinated. 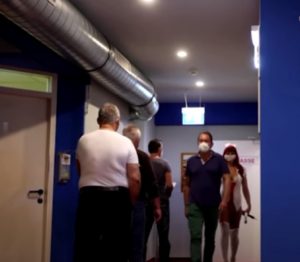 BIRD FLU CONCERNS AT STANLEY PARK, CAN YOU HELP?

BIRD FLU CONCERNS AT STANLEY PARK, CAN YOU HELP?