News has been shared that Peter Alliss, who has enduring links with Royal Lytham and St. Anne’s Golf Club, died at the age of 89 late on Saturday evening. Peter’s broadcasting career spanned an incredible 60 years and before that, he was a seasoned pro golfer, winning more than 20 tournaments and playing on eight Ryder Cup teams. He always particularly expressed a deep love for Royal Lytham and St. Anne’s Golf Club. Pictured below is Peter playing at Royal Lytham during the British Open in July 1963. 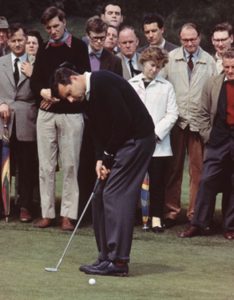 Golf journalist, Mark Townsend, once famously interviewed Peter, asking him at which Open course he would most like to be a member? Without hesitation, Peter replied Royal Lytham and St. Anne’s. When asked the reason, Peter joked that it was there that the members ‘were most likely to break out into a food fight’. He thought Royal Lytham was, ‘unstuffy, good fun while the course spoke for itself’. He said he loved the challenge of playing there and truly enjoyed commentating from there. Peter also played a part in Royal Lytham’s redesign in the 1970s and was an honorary member of the club.
Martin Slumbers, Chief Executive of The R&A and Secretary of The Royal and Ancient Golf Club of St Andrews, said, ‘Golf commentary will never be the same again after the passing of Peter Alliss. He was a tremendous supporter of golf and his experience, understanding and love of the game shone through in all that he did. Peter made a huge contribution to golf as a player and commentator and his voice was part of so many of the great moments in the sport’s history. On behalf of the organisation and the Club, I would like to send my sincere condolences to Jackie and his family. Our thoughts are with them at this sad time.’
Below is a further photograph of Peter playing at Royal Lytham and St. Anne’s – in the 1967 Pringle Tournament. 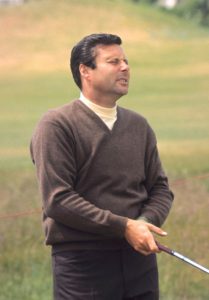