A BBC investigation has revealed that Lancashire NHS Dentists are not taking on new patients – with dire consequences for many residents in our region.

BBC researchers approached 118 dental practices in Lancashire.  Each one contacted said that they were not open to new NHS patients. This was even worse than the national picture, as the BBC found that nine in 10 NHS dental practices across the UK are not accepting new adult patients for treatment under the health service.

Focusing on Blackpool, where the BBC survey failed to find a single NHS dentist taking on new patients, many residents have told the researchers how they have been left desperate and even resorting to creating makeshift dentures.

Blackpool resident Caroline Young told the BBC that she had resorted to making her own dentures by melting modelling plastic after seeing instructions on social media. Crowns she had fitted previously had gradually fallen off She tried superglue for a while but now uses polymorph plastic – tiny beads that melt together when submerged in hot water – which can then be moulded to make false teeth. She said,  ‘It’s not what I want to do. I’d rather have teeth. It means I can smile at people a little bit from a distance and not look too freaky.’

Another Blackpool resident, new mother Rebecca Carey,  currently needs urgent treatment for a cracked tooth and the nearest NHS dentist she could find was in Liverpool –  more than 50 miles away.

The British Dental Association’s general dental practice committee chairman, Shawn Charlwood, said. ‘NHS dentistry is at a tipping point, with millions unable to get the care they need and more dentists leaving with every day that passes. We’re seeing the results of years of chronic neglect, set into overdrive by the pressures of the pandemic. The question now is will ministers step up before it’s too late? Without real reform and fair funding NHS dentistry will die, and our patients will pay the price.’

Commenting upon the Government’s stance on NHS dentistry Blackpool South MP Scott Benton said that recent dental contract changes made by NHS England should go a long way towards reducing the backlog of dental issues that grew due to the pandemic.

Anyone who has an urgent dental problem should contact the NHS dental helpline on 0300 1234 010. 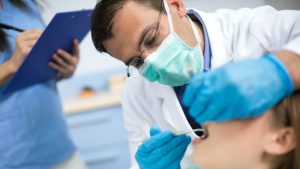