“Step back in time”

In 1881, Alfred Halstead began his career as a teacher at Ashville College in Pannal Ash, Harrogate, North Yorkshire. A change of career showed him becoming a journalist with, and later editor of, the North Bucks Flying Post. Halstead married his first wife, Eleanor Rees Raworth in 1888. She subsequently died shortly after giving birth to their only child, Nellie.(1889) He made the decision to remarry in 1901, wife number two was renowned for her literary prestige and was the widow of a London Solicitor. She was Amelia Solomon Barham (the ‘Millie from the smaller gravestone at the side!) They lived at 71 Park Road, Blackpool.

By this time Alfred was editor of The Blackpool Times, a position he held for 12 years. He died on 1st May 1907 at Haydock Lodge, a private asylum for the treatment of pauper lunatics in Newton le Willows. Haydock Lodge was managed by Charles Mott, who had been a Poor Law Commissioner until he had been forced to resign in disgrace. He was as an ambitious and ruthless character who had already made and lost one fortune by claiming to be able to keep pauper patients for the large sum of seven shillings per week, at a time when even the workhouses were charging eleven shillings. It was commonly known as ‘Mr Motts Madhouse’ Perhaps surprisingly he left the princely sum of £2,951. 8s in his will. Amelia died in 1919. They are buried together in Layton Cemetery.

One thing that Alfred did was to actually go out and see what news and history was out there for him to later transcribe for the newspaper. This also incorporated Lytham, St Annes, Bispham Fleetwood and Knott End ! 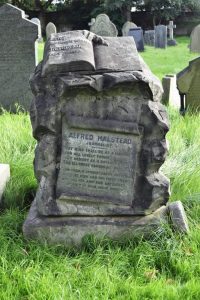 In1893 Alfred Halstead published a booklet entitled ‘Singleton Thorpe: Discovery of Remains’ which followed his own expedition in search of the ruins. “We began operations at a point nearly opposite the hulking which slopes to the sea about half a mile from Rossall and about four miles north of Uncle Tom’s Cabin. Back to Halstead again: “Our explorations revealed more than the mere forest and field remains. Evidences of the foundations of houses were not wanting. Our attention was first directed to what looked like a log tree. Closer notice revealed that it was quite different in shape from the other trees half buried in the sand. Digging and shovelling the sand laid it all bare, and we found it to be a straight and square piece of timber, about 17 feet long and 13 inches in a square breadth. There were the marks of other pieces of timber being fastened to it. 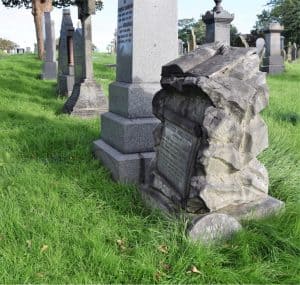 From Halstead’s description it seems likely that the timber was some sort of roofing joist, a suspicion confirmed in the minds of the excavators when they shortly: “…traced the foundations of what was evidently the wall of a house.” The wall, true to the construction of mediaeval random-build houses, consisted of: “…rough lime mixed with large cobblestones…the stones getting smaller towards the top…It measured about 22 feet in length, though we could not find a clear and unmistakable finish to it at one end.”
This wasn’t the only building, however: “We found in another place, about 150 yards from the fallen rafter, the same evidence of some sort of building. The rubble foundation, and the coarse lime and pebble mixture upon it was plainly visible; but it was too near the waves to follow it to the end.”
Unsatisfied with the excavation, several years later Halstead returned to the scene, this time accompanied by Mr Pearson, Ben Bowman, J. Whiteside, several carts, excavation equipment and a number of labourers. On this occasion more trees were uncovered, parts of which were taken home for souvenirs along with doorposts and what appeared to be a lintel. 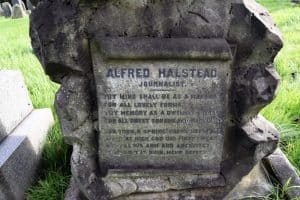 While researching old newspapers for this article it occurred to me events were described in so muchmore detail which in my case is great for social history and also to go that actually happened ! ( from the 1907 paper named above for citation and out of copyright ) We have Lytham courts and the round up for that week which included the following.

“William Smith being drunk in charge of a horse and cab – fined 10 shillings.”

“Collarless dogs, John Nickson, Richard Whiltshire and John Schofield were summoned for allowing their dogs to be at large withour collars bearing the owners name and address – fined 2 shillings and costs.”

“1908 has been an eventful one at St Annes, but somewhat quiet at the neighbouring town of Lytham. At both places the urban council on matters of improvement. Again the dredging of the North channel had occupied the serious attention of the council members.” I must admit I don’t think this still happens in the area but will of course stand corrected.