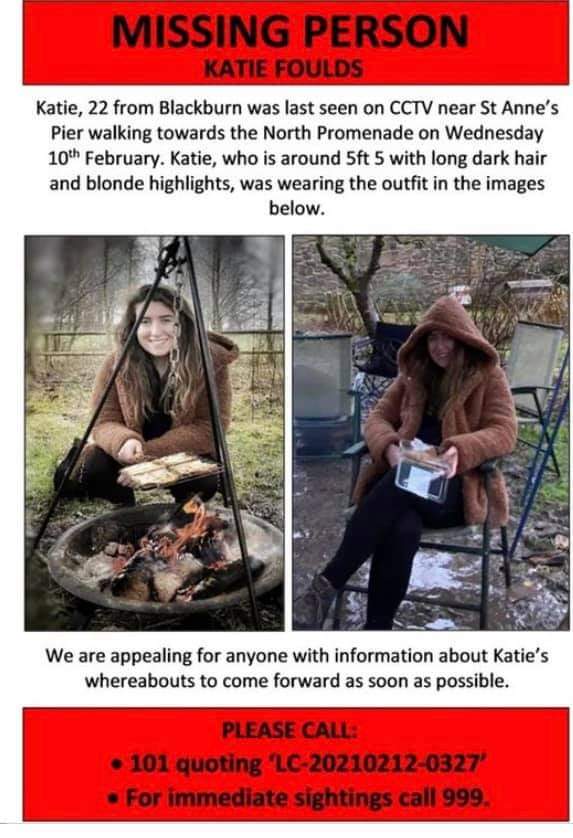 In relation to the previous appeals with regards to missing Katie Foulds we would like to provide an update.

As a result of our previous appeal a member of the public was identified who was in the area of St Annes beach on Wednesday, February 10, flying a drone. As a result of this, footage has now been obtained which shows a figure walking down the beach towards the water, close to South Promenade at approximately 4.27pm on February 10.

Sadly, and though we cannot be certain, we believe at this time that the figure is Katie, 22, who is missing from home in Blackburn, but was last seen around 4.14pm on February 10 in St Annes, close to Pleasure Island.

Katie’s family have been made aware and are being supported by specially-trained officers.

We would now like to hear from anybody who was on the beach at St Annes at around the same time, who may have captured any further footage which could help us confirm the figure seen walking towards the sea is Katie.

Although we can’t be certain that the footage is of Katie, taking into account the other lines of enquiry we have followed and the CCTV images around this time, both we and her family sadly believe it was her.

This is a desperately sad situation and our thoughts are with Katie’s family at this time. We would like to thank anyone who has assisted the investigation following the press appeals.

Katie is described as being around 5ft 5ins tall and has long brown hair with blonde highlights. She was last seen wearing a brown ‘teddy’ jacket and black leggings.

Anybody with information should call 101, quoting log 327 of February 12th.

From Lytham St.Annes News, our thoughts are with the family, and we thank everyone who shared the posts seeking her.