A group of local residents have contacted Lytham St Anne’s News sharing their anger at the pranksters who are now regularly pouring washing up liquid into the Promenade Gardens Lake, causing an unpleasant foaming mass of bubbles and suds.  The residents are not only concerned about the unsightly mess but also the untold damage the vandalism may cause to the habitat and territory of local wild-life. Photographs of the most recent prank are currently being shared on social media.

A spokesperson for Fylde Council has confirmed that they have now sorted the current problem which occurred earlier this week, although they still do not know the identity of the pranksters.  The spokesperson said, ‘We’re aware someone has put washing up liquid into the Promenade Gardens Lake. This has happened before and we don’t know who is doing it. The gardeners have flushed out the lake system by safely dropping water levels and refilled with fresh water. We will do it again if need be. We have not observed any issues with fish or water birds, but will closely monitor the situation.’

Alan Wright, from the The Wildlife Trust, told the Blackpool Gazette, ‘I presume whoever did this didn’t read the label on most washing up liquids that says ‘Harmful to aquatic life with long lasting effects’? Putting washing up liquid into any water course is adding chemicals to the water table. It would have an immediate effect on fish, probably causing irritation and would probably harm the invertebrates that the fish and birds eat, making them pretty nasty tasting too, I would think. It would also put harmful chemicals into the digestive systems of those predators. So, for a time, it will affect the circle of life around the Promenade Gardens, and it might be a while before it goes back to normal.’

Photograph below from Blackpool Gazette 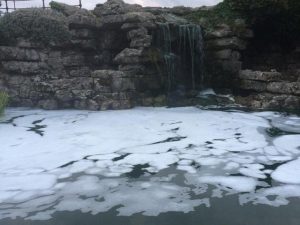 Let’s hope these are a R-OARING success!