A serious collision this evening (12th August, 2021) has caused several miles of congestion on the M6 around Preston and the M55 eastbound from Blackpool. The M6 has been closed northbound in Lancashire after a ‘serious collision’.

Highways England says the closure will last for ‘several hours’.

Lancashire Police and North West Ambulance units are currently at the scene of the incident between J32 and J33.

Highways England reports that the motorway northbound has been fully closed and traffic held as emergency services respond.

A spokesperson said: ‘This full closure will be in place for several hours. Expect considerable delays in the area.’ 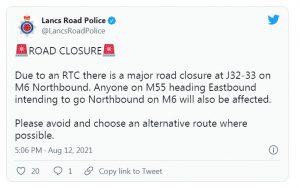 Photograph below of scene which has been shared on social media:

At long last, anyone coming to the UK must have proof of a negative test in the previous 72 hours (from 4.00 a.m. on Monday)

Have you seen Rupert?

The Mayor Of Fylde Officially Opens The Fairhaven Adventure Golf