Climate Central, a non-profit news organisation focused on climate science, has predicted that by the year 2050 rising sea levels may cause devastating damage to our coastline. They have produced maps which show that Lytham St. Anne’s, Blackpool, Thornton-Cleveleys and Fleetwood could be underwater by 2050.  The areas predicted to be below water level in 2050 are shown on the featured maps in red.

Climate Central claim the current risk of flooding could be three times higher than previously forecast. They argue that global warming triggered by the burning of fossil fuels – coal, gas and oil – widespread factory farming, increased livestock production and massive deforestation are causing an unprecedented loss of sea ice, producing rising sea levels, longer and more intense heat waves, and shifts in plant and animal habitats. These gradual changes will continue to accumulate over years, and once they become manifestly evident it will be too late to stop them.

Last year was the warmest on record – joint with 2016 – according to report released by NASA in January 2021. Climate Central have released maps to graphically show how rising sea levels will affect local areas. However, they add that these maps are based on predictions if we make no cuts to emissions. They also do not take into account engineered coastal defences.

The maps from Climate Central may be viewed here: https://coastal.climatecentral.org/map/9/-2.5648/53.8629/?theme=sea_level_rise&map_type=year&basemap=roadmap&contiguous=true&elevation_model=best_available&forecast_year=2050&pathway=rcp45&percentile=p50&refresh=true&return_level=return_level_1&slr_model=kopp_2014 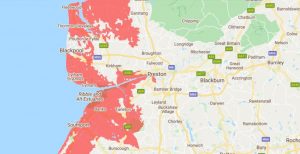 Tier 4 restrictions to be widened on Boxing Day, full national lockdown expected in the New Year

£20,000 From Fylde Council To Improve Stations On South Fylde Line