Wayne Rooney enjoyed an August Bank Holiday weekend in St Anne’s with wife Coleen staying at St Anne’s Beach Huts and Apartments with their four boys Kai, 11, Klay, 8, Kit, 5, and their youngest Cass, aged 3 . Zoe the owner Tweeted, ‘Loved having you & the family as guests,’ Coleen replied ‘Thank you so much, we all had a great stay’ (see picture below).

The Derby County boss also shared a photo on social media of him and his sons inside the huts on Bank Holiday Monday. featured photo) . While he was able to enjoy the weekend with his family, Wayne also turned hero when he helped a man with an injured ankle on the beach.

After watching the man suffer the suspected injury by jumping off the Promenade and onto the beach, St Anne’s Beach Huts and Apartments owner Stuart Robertson told Lancashire Live that Wayne quickly came to his rescue. ‘He jumped over and fireman lifted the guy off the beach and helped him,’ said Stuart. ‘They were amazing; the Rooney family took care of this injured lad.’

Stuart added that Wayne and his family stayed on the seafront until 10:30 p.m. ‘They’d had a really full day, got hounded, but they must be used to it. They do get recognised a lot. They were just wonderful guests, they were really nice, just a normal family having a day out at the seaside. Obviously they got recognised a lot, that was a worry for us because we just wanted them to come and have a normal day, the same as all our other guests. But obviously, they do get recognised but they were just so patient and they went out of their way to take selfies with children or any mums and dads who wanted it.’ 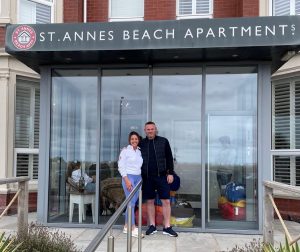 Tyson’s Father John Fury ‘The Truth’ Is Coming To Blackpool

Another busy day for our valiant volunteers 🐝