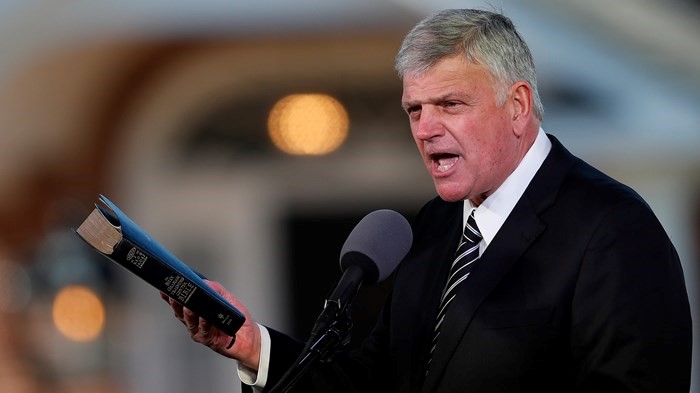 A court has decided that Blackpool Council and Blackpool Transport must apologize for removing ads for evangelical preacher Franklin Graham from public buses They had to admit the act was discrimination and have had to pay the organizers of the festival £109,000 (about $150,000), a judge has ruled.

In response, Franklin Graham, the son of the late tele-evangelist Billy Graham, said, ‘We thank God for this ruling because it is a win for every Christian in the UK.’

In July 2018, promotional bus adverts for the Lancashire Festival of Hope with Franklin Graham in Blackpool were removed by Blackpool Borough Council and Blackpool Transport Services Limited because they asserted that the ads ‘resulted in heightened tension.’ At the time, the decision was reported as in response to what was said to be ‘customer and public feedback,’ expressing disapproval of Franklin Graham’s Biblical views about sexuality and marriage, including Franklin Graham’s position on LGBT (lesbian, gay, bisexual, and transgender) issues. When asked about his views at the time by the BBC, Mr Graham said he believes ‘marriage is for a man and a woman and that is what the Bible teaches us’, adding same-sex weddings were a ‘sin’. ‘If we don’t repent and turn from our sins then we are doomed.’

The court found that the ads had been inoffensive, simply reading ‘Lancashire Festival of Hope with Franklin Graham–Time for Hope,’ along with the date, venue, and website for the event.

Presiding Judge Claire Evans in explaining the decision said, ‘Graham’s religious beliefs include that – God’s plan for human sexuality is to be expressed only within the context of marriage – marriage is exclusively the union of one genetic male and one genetic female. These are religious beliefs shared by the organisers of the Festival and the trustees of the Claimant and, indeed, by many Christians of different denominations.’

She noted that Graham had also been accused in a September 2018 article in The Guardian newspaper of having a ‘track record of homophobic and Islamophobic comments.’

She said, however, that Blackpool Transport had a ‘wholesale disregard’ for the Lancashire Festival of Hope’s right to freedom of expression.’

It had also violated the UK’s Equality Act of 2010, which makes it unlawful to discriminate against someone because of religion or belief.

Judge Evans noted that sincerely held traditional religious beliefs about marriage, which are characteristic of Christians and other religions, do not make the individuals or organizations who have them ‘extremist.’

Blackpool Council has agreed to pay the festival’s legal costs, totalling £84,000, and another £25,000 in damages. Cllr Lynn Williams, Leader of Blackpool Council, has duly published this apology:

“On 10 July 2018 Blackpool Council and Blackpool Transport Services Limited made a joint decision to remove advertisements promoting the Lancashire Festival of Hope, due to be held at the Winter Gardens between 21st & 23rd September 2018, from BTSL’s buses and trams. This followed complaints from some members of the public about certain religious beliefs, in particular concerning same-sex relationships and same-sex marriage, expressed (or believed to have been expressed) on previous occasions by the main speaker, Franklin Graham.

“We sincerely apologise to the organisers of the event for the upset and inconvenience caused.

“We have learnt from this experience. We are committed to ensuring equality of access and opportunity for the population of Blackpool and providing and improving quality services for all. We have now introduced clear and transparent policies that will ensure no repeat of events such as these.” 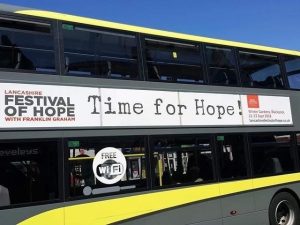