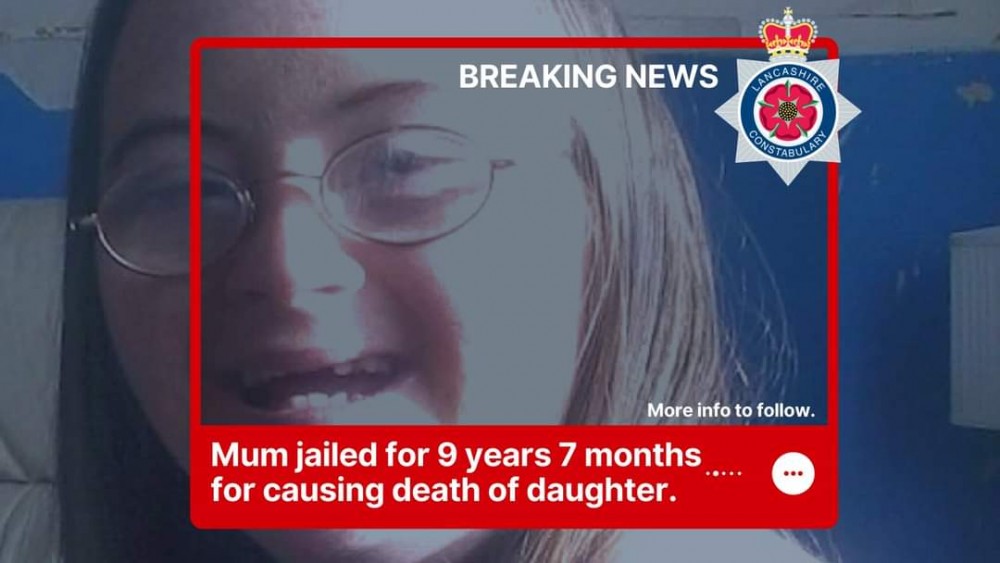 Blackpool mother jailed for horrific starvation and abuse of her disabled daughter.

From Blackpool Police – A mother who ill-treated her disabled daughter, leading to her death from severe emaciation and neglect, has today been jailed for 9 years and 7 months.

Elaine Clarke, 49, of Garden Terrace, Blackpool, was sentenced at Preston Crown Court after previously admitting to the gross negligence manslaughter of her daughter Debbie Leitch, who had Down’s Syndrome.

A mother who cruelly ill-treated her disabled daughter, leading to her death from severe emaciation and neglect, has today (Thursday, February 24) been jailed.

Elaine Clarke, 49, of Garden Terrace, Blackpool, was sentenced at Preston Crown Court after previously admitting to the gross negligence manslaughter of her daughter Debbie Leitch (pictured), who had Down’s Syndrome.

Around 10.40pm on August 29, 2019, paramedics attended Garden Terrace after a family member sadly found Debbie, 24, dead in her bedroom.

Ambulance crews found faeces on the floor, as well as maggots crawling in her room. They spoke with Clarke, who said she knew Debbie had died around 8pm, but waited before calling 999.

A Home Office post-mortem examination gave Debbie’s cause of death as severe emaciation and neglect with extensive scabies skin infection. This left Debbie in such pain she was often heard crying and pleading for help. The pathologist found Debbie weighed 23kg – 3st 10lbs – at the time of her death. Mites were found on her body and clothing, with faeces and urine across her body. Her skin and body had wasted away, with her bones visible.

Following a major investigation, Clarke later received summons to appear at court to answer the charge of gross negligence manslaughter, pleading guilty. She was sentenced to nine years and seven months in prison.

Det Ch Insp Lee Wilson, of Lancashire Police’s Force Major Investigation Team, said: “In my time working as a police officer, this remains one of the most difficult and tragic cases I have investigated. This case affected everyone who worked on it, from the first North West Ambulance Service and police responders, to detectives, colleagues from the Crown Prosecution Service and barristers. It will live long in the memory sadly.

“Debbie’s death was wholly avoidable. She should be alive and well, living a good and happy life today. That she isn’t lies firmly at the feet of the one person upon whom she relied – her mother, her paid carer.

“We know Debbie came to Blackpool having been a happy, thriving college student. Sadly, in just a few years, she was let down in the most extreme manner by the dark and malevolent personality that is Elaine Clarke. Clarke has shown no remorse at any stage in this lengthy investigation – any tears she has shed were, I am convinced, for the predicament she now finds herself in. She is truly a despicable individual.”

For more information, go to: https://orlo.uk/cgDzB

PrevPreviousMan detained for allegedly carrying a knife this afternoon.
NextCould the Fylde Coast be on Putin’s Pathway of Peril?Next